3 years is a pretty long time, especially in Internet time. 36 months, over 1000 days. Anything lasting that long and growing from strength to strength is worth celebrating. We will be completing 3 years when we all meet on the 11th day in the month of August 2012 for the monthly null Bangalore meet-up.

As our chapter has progressed we have evolved with it as well. From initially being just a null meet we joined hands with OWASP Bangalore and now we have been joined by Garage4Hackers and SecurityXploded groups. The idea at null Bangalore has always been about building a great community. Even though I was the ‘Chapter Lead’ officially, there were more than 1 un-official chapter leads ensuring that we have a venue, we have speakers, we get newer members and everything goes smoothly. 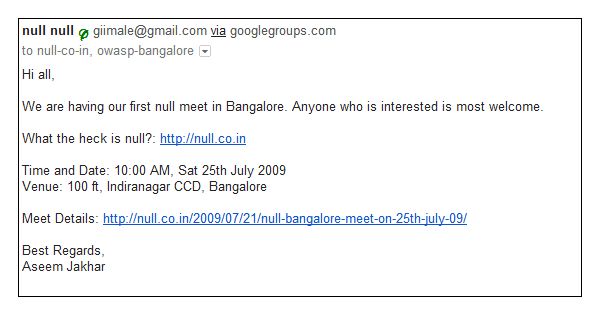 In three years we have shifted to 3 different venues. Based on feedback and generally with increasing numbers we have managed to get the support of various companies and individuals. Starting with 5 people who turned up for our very first actual meet and gradually increasing to average 20 people in the 1st and 2nd years. From there the growth has been explosive and we have doubled our numbers to average about 50+. What used to be a meeting that started at 10 AM and finish by 12PM now usually starts at 9:30 AM till 2 PM. That is about 4+ hours packed with computer/network security knowledge and networking. Even know there is no prior registration, no cost for attending the monthly meeting.

We have been lucky to have an active set of people from G4H and Security Xploded who decided to offer a 10 month Reverse Engineering courseware completely free as part of the combined meetings.

Some of the unique and pioneering things that were started at null Bangalore have been so sucessful that other chapters have started using them as well. All meets end with the next month’s talks decided at the physical meeting. This ensures that people who attend get the content they want. About 20 minute section dedicated to asking subject matter experts about various topics in a face to face manner which engages every person in the room. And last but not the least is the null Humla sessions which were started to fulfill the need of deep technical knowledge sharing that a talk can’t offer.

More and more people are attending the meetings from outside Bangalore and others are demanding that the meets be live streamed. We are trying to listen and implement what people want from us and also ensure that all the partners are getting an equal say in the combined meetups.

It has been a rewarding 3 years for me and all the others who are associated with null at various points in time. Most of my friends in the security industry are from this small, vibrant but passionate community and being a part of this has been a life changing event for me.

Switching to a newer venue, due to space constraints. We assumed the venue was good enough for 25 people!

I would like to thank all of the null members who have attended the meets, given feedback, volunteered their time, money and effort to make this such an amazing and dynamic null chapter in the whole of India. Special mention for Riyaz and Prashant KV, both of whom have taken over the mantle of null Bangalore chapter leads and are doing such a great job that the entire transition was so smooth.